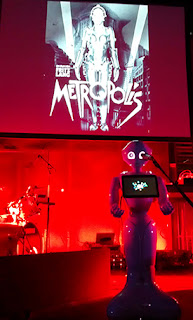 On Sunday 1st October, our humanoid robot Pepper took centre stage at the Sensoria Festival to introduce a sold-out screening of Fritz Lang’s iconic 1927 silent film Metropolis. The screening, which was accompanied by a live score by post-industrial electro-noise duo Factory Floor, took place in the awe-inspiring Face of Steel hall at Magna, a former steelworks on the outskirts of Sheffield.

Widely regarded as a pioneering work of cinematic science fiction, Metropolis depicts a dystopian future where a city’s downtrodden, exploited underclass of workers secretly plot a revolt, and features a robot which plays a crucial role in the events that transpire.

Based in and around Sheffield, Sensoria is the UK’s festival of music, film and digital media, and is renowned for its risk-taking and innovation. Now in its 10th year, Sensoria aims to provide access, raise aspiration and encourage new talent across the arts.