Our colleagues Lauren Powell and Jack Parker have recently had an article published entitled 'Using Recurrent Neural Networks to Compare Movement Patterns in ADHD and Normally Developing Children Based on Acceleration Signals from the Wrist and Ankle'. 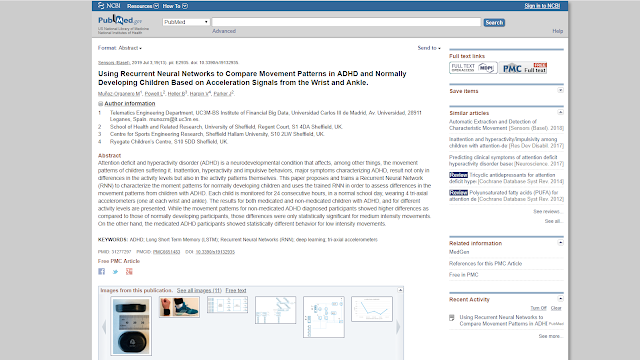 Attention deficit and hyperactivity disorder (ADHD) is a neurodevelopmental condition that affects, among other things, the movement patterns of children suffering it. Inattention, hyperactivity and impulsive behaviors, major symptoms characterizing ADHD, result not only in differences in the activity levels but also in the activity patterns themselves. This paper proposes and trains a Recurrent Neural Network (RNN) to characterize the moment patterns for normally developing children and uses the trained RNN in order to assess differences in the movement patterns from children with ADHD. Each child is monitored for 24 consecutive hours, in a normal school day, wearing 4 tri-axial accelerometers (one at each wrist and ankle). The results for both medicated and non-medicated children with ADHD, and for different activity levels are presented. While the movement patterns for non-medicated ADHD diagnosed participants showed higher differences as compared to those of normally developing participants, those differences were only statistically significant for medium intensity movements. On the other hand, the medicated ADHD participants showed statistically different behavior for low intensity movements.